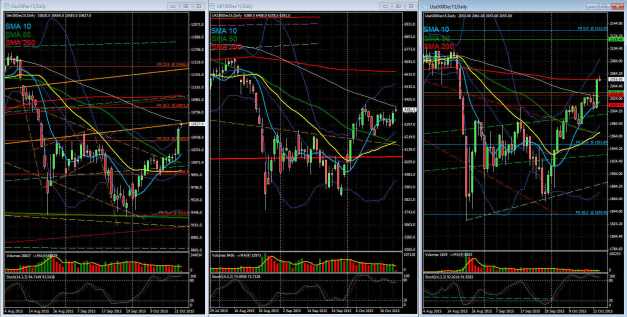 In the pre-opening, European indexes traded higher, gaining around 1%. The main issue today is how far and how long it will extend the “effect Mario Draghi.” Yesterday, the ECB President said that the Commission is ready to review the amount, the composition and duration of the debt purchase program and admitted able to adjust the rate at which remunerates deposits that the European institutions are (currently in 0.20%). These words were not a surprise. Many investors and economists have predicted this, so an important part of the rise in European markets during the month of October was due to this expectation. Mario Draghi is a skilled manager of expectations and an excellent communicator with the financial markets, even to have a greater effect than the disclosure of corporate results and economic data. The publication of the preliminary PMI indices for October should not have a major impact on the session trend but will give important clues on the state of economic activity in the Eurozone, especially in a delicate phase of the world economy. Economists estimate that the economy of the Eurozone presents a certain resilience in this context, supported by improved domestic demand. Among the factors contributing to the strength of domestic demand appear to reduce unemployment in several countries, the fuel price reduction and lower interest rates.

The words of Mario Draghi were the main catalyst for the rally on Wall Street. The prospects for an increase of the injected liquidity in Europe has overshadowed the results of companies. The results presented today fall under this standard earnings season (which is similar to the previous) characterized by profits above estimates but below the expected revenue. This trend are part of companies such as Texas Instruments, American Express, eBay and Dow Chemical. The main exception was the McDonald’s that exceeded estimates at the level of profits and in terms of revenues. Of the companies that reported yesterday its results, Caterpillar and 3M deserve special attention because of its high geographic exposure and sensitivity to the cycles of the world economy. Caterpillar announced an adjusted EPS of 0.75 USD and revenue 10960 M.USD. Analysts had anticipated an EPS of 0.78 USD and revenue 11250 M.USD. The company’s CEO acknowledged that the company goes through “hard times” because of the weakness of some of its major customers including mining companies. For 2016, the company estimates a decrease of 5% of revenues due to the economic slowdown in China and the USA (in respect of this country it was the first company to mention it) as well as due to the recession in Brazil. 3M announced an EPS of 2.05 USD compared to 1.98 USD estimated. However, revenues reached 7710 M.USD compared to 7850 M.USD estimated. For 2015, the company estimates that sales (60% of which originate outside the US) increase between 1.50% and 2% compared to 3% – 6% projected earlier. The macroeconomic data did not have a significant reflection in the session trend. According to the Department of American Labor, the number of unemployment benefit applications in the US increased by 3,000 to 259,000 last week. Economists pointed to the 265,000. Also, leading indicators of the economy during the month of September were down 0.20%, while economists had expected that this indicator had remained unchanged. On the housing market, used home sales hit the 5.55 million units (annualized number) over the same period, a number higher than the 5.38 million expected.

The effect “Mario Draghi” also extended to Asian markets, particularly Japan, a Market with a high correlation with European equities. One of the consequences of Mario Draghi’s words was the devaluation of the Yen which gave an additional boost to the shares of exporting companies.