European markets started the week without significant swings. On this last day of April, most indices were positive, with investors focusing on reported corporate results and news on merger moves. In the retail sector, British supermarket chain Sainsbury’s will merge with Asda (controlled by WalMart) in an operation valued at 15 000 M.GBP. Shares of Sainsbury’s rose 14.87%, while rival Tesco’s shares lost ground as this potential merger is expected to lose market share. The telecommunications sector showed a slight gain on the day the merger of T.Mobile and Sprint was reported. Regarding economic indicators, retail sales in Germany fell unexpectedly in March (-0.60%). Concerning the US tax reform, the press reports that Germany, France and the United Kingdom have joined efforts against the potential US new customs duties, and has asked the US Government not to apply the new rates to imports of metals from Europe. In March, Donald Trump imposed a 25% duty on steel imports and 10% on aluminum imports, but Europe was a temporary exception to this measure, which ends on May 1.

The Earnings Season and merger & acquisition moves were the main themes in the begining of the week. Today before the opening, McDonald’s rose about 5%, after having reported results and revenues above estimates. In terms of consolidation moves in the telecoms sector, T-Mobile reached an agreement to buy rival Sprint in a deal of 26,000 M.USD. On the other hand, Andeavor rose more than 9%, after rival Marathon Petroleum agreed to buy the company for more than 23 000 M.USD. In terms of economic indicators, consumption-related inflation, the measure most considered by the Fed, stood at 1.90% in March, compared to the same month last year, which puts it at highest level of the last 17 months. In the same month, household income increased 0.30% (vs. 0.40% estimated) and expenses grew 0.40% (vs. 0.40% forecast). Regarding the real estate market, real estate purchase and sale contracts increased by 0.40% in March compared to the previous month and the estimated 0.50%.

European markets were up on the last day of the week. As in the US, the highlight is for the technology sector, the day France’s Capgemini reported good business results. Kepler Chevreux raised the target price from 112 € to 116€. On the other hand, the Royal Bank of Scotland announced an increase in quarterly profit to 792 M.GBP, higher than predicted, but its stocks reacted negatively to the news that the institution awaits a fine by the Department of Justice. In Madrid, BBVA reported a quarterly result of 1340 M. €, 17% higher than expected by analysts (Stocks rose more than 2%). In the automotive sector, Daimler reported a quarterly result decline despite record sales at Mercedes (Stocks gained 1.02%).

Wall Street opened up, with the technology sector shining once again. Amazon shares rose more than 4.50 percent, a day after the company reported quarterly results more than doubled, driving its shares to record aftermarket levels of 7 percent. EPS reached USD 3.27, above USD 1.48 in 2017 and USD 1.26 estimated. Revenues increased 43% to 51,000 M.USD, higher than the forecast 49900 M.USD. At the same time, Microsoft beat forecasts in terms of profit and quarterly revenue: the EPS reached 0.95 USD (vs. 0.85 USD expected) and revenues reached 26820 M.USD (vs. 25770 M.USD). The company has raised its forecasts for the coming quarters. Intel also reacted by appreciating that it had exceeded its first quarter profit expectations and raised its earnings and revenue forecasts to 2018. The EPS reached 0.93 USD vs. 0.72 USD expected. The first reading of GDP for the first quarter of this year was published today: the US economy expanded by 2.30%, above estimates of a 2% growth. However, it is important not to extrapolate the data from the 1st quarter to the other quarters of the year, since traditionally the former is usually the weakest of the year. In the last 31 years, GDP grew 1.77% on average in the first quarter and 2.66% in the year as a whole. In the last 7 years, this difference is more evident: in the first quarter GDP grew by only 0.73% compared to the annual increase of 1.99%. Inflation associated with GDP stood at 2.50% (in annual terms). On the other hand, the University of Michigan consumer confidence index fell from 101.4 in March to 98.8, surpassing forecasts of 97.90.

Today market behaviour was marked by the reaction of the investors to the disclosed business results. The automotive sector was among the best performers. Volkswagen reported quarterly results lower than expected, but recorded a very significant increase in vehicle sales, so its shares rose 2.89%. Telefonica increased by 1.13% (net income reached 837 M.€, compared to 779 M.€ recorded in 2017 and 801 M.€), while revenues fell to 12190 M.€, but were slightly above of the expected 12150 M.€. In the banking sector, Deutsche Bank fell more than 1%, after having reported a profit of 120 M.€ (-79% compared to the first quarter of 2017), lower than the 376 M.€ anticipated by analysts. As expected, the ECB kept interest rates unchanged as well as the stimulus policy to the economy covering the monthly purchase program of 30,000 M.€ in assets up to September. At the press conference after the meeting, Mario Draghi confirmed that the European economy is undergoing a more moderate growth period, although it remains consistent with a solid expansion phase. Regarding inflation, Draghi mentioned that the ECB’s board of governors remains confident that inflation will converge towards the monetary authority’s target (inflation next but below 2%). Asked if it would be in June that the ECB would announce changes to stimulus policy, Mario Draghi said it was “premature” to speak in a timimg.

Wall Street closed higher, highlighting the Nasdaq 100 index. Favoring the technology sector was the performance of Facebook which reported the 12th consecutive quarter in which turnover surpassed the estimates. The result surpassed the estimates. Advanced Micro Devices also showed a very significant gain, as a result of its presentation of results that showed encouraging prospects in terms of revenues. Ford Motor also reported higher-than-expected profit and sales. In decline, eBay was devaluing in response to its results, as well as AT & T and General Motors. In terms of economic indicators, the number of weekly applications for unemployment benefits has fallen by 24,000 to 209,000, the lowest level since 1969. Durable goods orders increased by 2.60% in March and the trade deficit narrowed by 10.30% to 68 000 M.USD.

The 10-year Treasury yield climbed above the key 3% level for the first time since 2014. Rising US government bond yields can crowd out consumer and corporate spending.

Earnings season rolls on. Shares of Caterpillar sank as much as 6% after calling its first-quarter results a “high watermark” for the year. Google-parent Alphabet shed more than 5% after reporting an increase in capital spending.

Other FAANG stocks were also hit hard. Shares of Facebook, Netflix and Amazon shed more than 4% each.

Oil topped $75 a barrel before plunging more than 2.5%. Traders shook off mounting supply concerns after President Donald Trump, alongside French President Emmanuel Macron, told reporters the US may preserve the Iran nuclear deal. 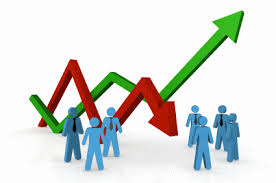 What is ‘Spread Betting’

Financial spread betting with ActivTrades enables traders to speculate on the movement of financial instruments, by choosing the value (stake) of each point the price moves.

Advantages of Spread Betting through CFD:

The week started high for most European stock exchanges, with the earnings season remaining the dominant theme of the session. UBS shares fell about 3%, although the institution reported a 19% increase in quarterly net income. Concerns will have been the presentation of cautious prospects for the second quarter of the year. On the other hand, Philips also reacted to the published results, having advanced more than 5%. The company reported its quarterly results, which surpassed estimates, given the increased demand for hospital equipment in China and the US. Profit in core activities increased by 15% to € 344 M., compared to the expected € 332 M. €. Comparable sales grew 5% and new orders increased 10%. At the same time, the food industry was affected by the decline of Reckitt Benckiser which was penalized by the fact that J.P. Morgan had reduced its target price. The producers of raw materials were among the few sectors to close with losses, albeit slight.

The US market traded unchanged on a day marked by steady rise in sovereign yields. In addition to the results, Merck and Caterpillar were attracted to attention after Goldman Sachs and Citibank raised their recommendations. After the closing of the session will be known the results of Alphabet, with analysts pointing to an EPS of 9,299 USD.

European markets closed with contained variations, with the different economic sectors experiencing various behaviors. Business results were one of the catalysts of the markets, on the day the accounts of Ericsson and Reckitt Benckiser were known. The telecoms company reported a quarterly loss significantly lower than last year, so its shares have appreciated sharply. Reckitt Benckiser reacted negatively to the information that its sales growth was below estimates. On the other hand, Air France KLM fell 2.51%. The company, which is being affected with frequent strikes since February, announced today that it will consult directly with employees about the proposed salary increases and the company’s CEO threatened to step down if the result is negative. As mentioned, the price of oil was reversed in today’s session, influenced by the tweet of US President Donald Trump, who says that OPEC kept prices “artificially very high” and “would not accept it.” The major oil companies ended today’s session with slight losses.

The US stock market was trading lower, under pressure from the tech sector. Apple shares fell more than 3 percent after Morgan Stanley mentioned that iPhone sales, next quarter, will disappoint Wall Street. On the contrary, General Electric appreciated, having recorded results and revenues that exceeded expectations and reiterated its forecasts for the rest of 2018.